Sophia Massad’s “Alone at Night” is Introspective and Spectacular

“Nighttime is kind of the rawest time for someone, and, when you’re really alone in your bedroom, and you just kind of find the deepest, darkest parts of you, it can just be really hard to just lay in bed and focus on yourself for some time,” Massad said in an interview with Dennis Spielman from Uncovering Oklahoma,

The song starts with a thought-provoking lyric, “drink to remember or drink to forget,” which sets the tone for the rest of the song, a song about introspection.

Massad’s style is described as “formidable and poetically honest,” which perfectly describes the new single. Massad says her sound is inspired by Alabama Shakes, Amy Winehouse, and Fleetwood Mac.

Massad engineered the album herself, and it was mastered by Dustin Ragland.

In an interview with 92.9 the Edge, Sophia said she grew up in a musical family, who encouraged her to pursue music as a career. She recorded her first self-titled EP at 16, attended ACM@UCO, and eventually joined the local indie band the So Help Me’s, who just recently played a show on the Velvet Monkey Salon rooftop in the Plaza District. 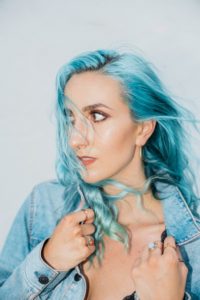 Massad released her single “Insecurities” in April and said she wrote the song about an ex-boyfriend and the idea of someone putting others down because of his/her own insecurities. “Insecurities” is slightly edgier, while “Alone at Night” is a slower jam that still has that distinct ‘Sophia Massad feel’ we know and love.

Both new songs deal with facing harsh realities in oneself and in other people, and both songs tap into raw, unadulterated emotion.

You can read more about the song on Massad’s website, and listen to the new tunes on Spotify.

SATURN is a three-piece band from OKC, they are currently celebrating 16 years together and are releasing a single titled "Heaven Help" along with a lyric video. It’s...

October is looking to be an exciting month at Saints Sessions! We can’t wait to have some of Oklahoma’s top jazz talent up on stage every Thursday from...