Annie Oakley is releasing their debut album "Words We Mean," which tackles issues of miscommunication. We sat down to talk with them about their musical journey, what they're excited about, and what they're nervous about. 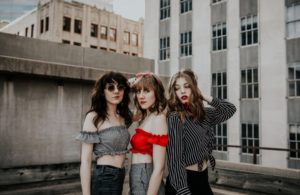 has been in the Oklahoma Folk music scene for years, making a name for themselves as Americana badasses. Now, they have a full length album to show for it. It’s sentimental, and it’s bold. It’s like a warm cup of tea – comforting, but it packs in a whole lot of flavor. “Words We Mean” is a delicate and deliberate musical experience from three Oklahoma gals (along with some stellar featured guests) who know how to get their message across.

Years in the Making

Sophia and Grace Babb are twin sisters who have played music together for years. They played school talent shows ain junior high and worked their way up to playing on street corners at art walks.

They started out under the simple name “Grace and Sophia,” but they quickly decided they needed a real name. After noticing several signs, and especially after hearing the Miniature Tigers song “Annie Oakley,” it became clear that it would be their band name. They actually were able to get permission from Annie Oakley’s descendents to use the name.

Soon after, they added violinist Nia Personette, who had been friends with the Babbs for years and had played violin since she was six. They played their first show as a trio at Tres Cantina.

“It ended up working out, and I had the time, and we were already really good friends, so we all just worked really hard at it and played a bunch of gigs,” Nia said.

From there, they continued to grow, actually making money at gigs and playing listening room shows and music festivals.

“Pretty soon, you get enough fans that will pay a ticket price to see you, and you get enough songs and enough stories, and then we were playing the Blue Door, which was our dream when we were younger,” Grace said.

Saying What You Mean – A Journey in Vulnerability

According to an OUDaily article about the band,the Babb twins started playing music after their father’s suicide in 2013. Since then, they have channeled their grief and worked through complicated emotions with music. At multiple shows, they have said the song “If I Were a Ghost,” is dedicated to their father and deals with their emotional trauma.

On the album is another song about family, entitled “Brother,” which is about a family member who changed political perspectives and shifted from the views of the family. The song is their way of working through that confusion.

The new album, “Words We Mean,” deals with heavy emotions and has an overarching theme of communication, or lack thereof. The album features songs such as “Nothing to Say,” “Missed Connection,” and the title track “Words We Mean.”

Sophia and Grace both study Mass Communications at Oklahoma City University, and Sophia interned recently at the Bloomberg BNA in Washington D.C. Communication is a huge part of their lives.

“Getting our point across, getting the message across, telling stories, that’s entirely what our lives are made up within journalism and songwriting,” Sophia said. “So, when you have a career that’s built around communication, there’s always more room for miscommunications, and, if you get those things wrong, then you change how good a song is or how effective a story is or an article, so it’s just a huge phenomenon that we deal with every day.”

Not only is the theme of communication a professional goal, but Grace said it’s also something that’s very personal to her.

“Definitely in this album, it’s apparent that saying what we mean is valuable to us. There’s too much bullshit in the world. We talk too big.” – Grace Babb

Annie Oakley decided in December 2017 that they wanted to record a full-length album, so they developed a Kickstarter and, in Spring 2018, they launched the Kickstarter, asking for $6,000. They ended up raising more than $7,000. As soon as their project was funded, they started recording at Lunar Manor studios. Now, they’re excited to finally have physical CDs in their hands, and they’re waiting for the official release of the album.

“It was just time,” Sophia said. “We had written enough songs for an album, and we were not playing our songs that we had previously recorded, and people were constantly asking us where can I listen to your music, and that was kind of a sign that it was time to make an album.”

They worked with all local artists to create the album, including Kyle Reid on pedal steel and John Calvin Abney on piano. Brine Webb played bass, engineered, mixed, and produced the album. Steve Boaz and Cody Brewer are also featured, and Sophia said Bryan Horton from Horton Records in Tulsa helped with the process.

They said the recording process was similar to their “Thought of You a God” EP, with the biggest difference being that they self-produced the album, while local folk artist Samantha Crain produced their EP. The album also took much longer to record, and they said the process was difficult.

“It was hard work. We had really long days,” Sophia said. “There were days set for guitar, days set for violin. Vocals were the harder because you’re singing one song at least three times. That’s twelve songs. So it was a lot. By the end of the day, our voices hurt and sounded like shit.”

Grace said the process was physically gruelling because, by the end of the process, each song is sung nearly sixty times. However, she said she was happy that they put so much work into it to get it to sound exactly right. With the EP, they didn’t record near as many takes, and they ended up not being satisfied with the EP. This time, though, they were more strict with the recording.

Annie Oakley released the first single “Did you Dream” August 10th and has received a lot of positive feedback. They played two shows August 17 and 18, celebrating the release of the album and the success of their kickstarter. They said the official release will be October 12. They will be debuting their music video for their second single “Pomp and Swell” September 12.

They said they’re excited for “bigger horizons” like the idea of possibly taking their music abroad. Annie Oakley will be attending a folk conference in Montreal in February. They’ve attended the conference before, but, now that they have a full album, they’re hoping that will get them on the radar as international artists.

Nia said she’s also excited about the possibility of touring.

“My favorite part is touring, and spending time with Grace and Sophia is always a good time, and it would just be really really cool to travel, like to the point where I would even take off time from school to travel,” she said, “I would drop everything to do it.”

They said they’re nervous about some potential negative feedback when they play new songs live. When artist release an album, they usually play those songs for about a year to get people used to them. However, they’re taking a different approach.

“We always write, and we’re always getting bored with our old stuff, so we just want to play a new stuff,” Sophia said. “We just need to find a medium between the two.”

Nia said she feels nervous about continuing to grow as artists.

“It’s really hard, when you’re doing a specific thing and have a lot else going on, to not get comfortable in what you’re doing, and so I’m not nervous about not sounding good, but I’m nervous about coming to stagnancy,” she said.

Plans for the Fall

Sophia will be studying abroad in Europe in fall, so the band is trying to pack in as many shows as possible. They managed to book five shows in the three weeks that Sophia is in town. Grace said they will play more shows when Sophia returns during the Spring semester. For the time being, Grace and Nia have plenty to do.

No matter where they travel or where life takes them, Grace said Oklahoma will always be their home.

“We might not always play shows in the future as we get older, but we’re always going to be writing, and I think we’ll always come back to Oklahoma, even if we move,” she said.